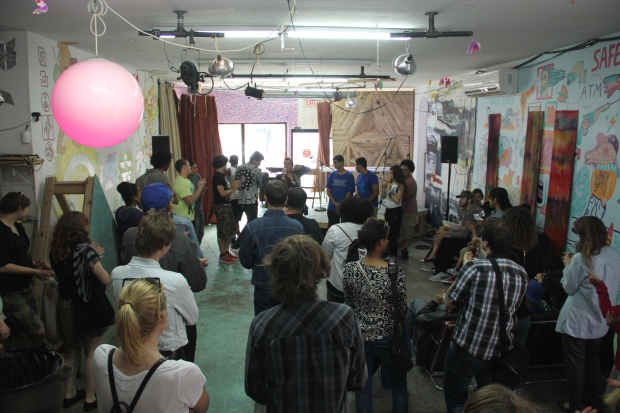 When one takes a gander at Silent Barn, located at 603 Bushwick Avenue, it appears to be just another closed and somewhat ramshackle storefront. Upon further analysis of the oddly electric, pastel mural covering the gate, it wouldn’t be unreasonable to suspect that this space is frequented by “hipsters.” What then, makes Silent Barn (otherwise known as “the Barn”) different from other art spaces in Bushwick? For starters, they possess a genuine and proven commitment to diverse programming. They also have a Community Outreach group that is dedicated to ensure that the arts collective is a socially conscious one.

According to its website, Silent Barn “is a multi-functional all-ages art incubation space,” but in reality, it is so much more than that. This is certainly a biased statement, as I myself recently became a member of Silent Barn’s Community Outreach group. I had no prior art collective experience and that’s precisely why Silent Barn is unique. You can just dive in if you want to be involved. For example, the youth group, Educated Little Monsters (ELM) holds their weekly workshops there. Meanwhile, I’ve co-organized an exhibition of paintings by seniors of the Diana Jones Center, which is a block away from Silent Barn. The neighborhood activist group, Northwest Bushwick got their start at the Barn. And the arts collective has so much more in store. 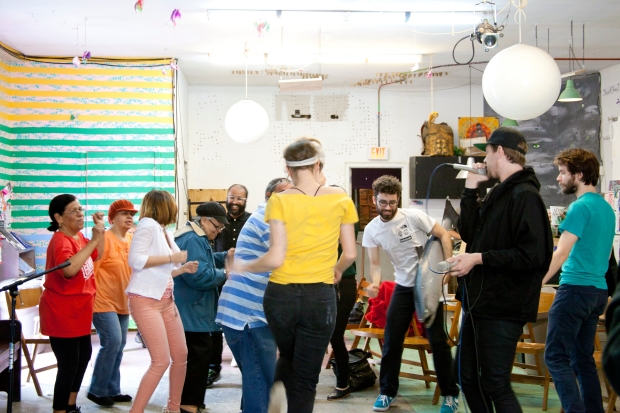 After one of our bi-weekly meetings, I sat with two members of the Outreach group, Brandon Zwagerman and Andrew McFarland, to get the scoop on why Silent Barn cares and how it sees its role within Bushwick. The Barn is referred to as a DIY space, but Zwagerman prefers the term “DIT (Do It Together) culture and [what its] values embrace and put forward: that without a lot of resources anyone can put on cultural events and bring people together. It’s about accessibility to a lot of different people.”

Zwagerman helped the Barn find their current location a little over a year ago. He said, “It was tough because we wanted a space that was both commercial and residential, kind of a holistic 24-hour idea.” When they signed a ten-year lease, they knew they wanted to serve and sustain the community. 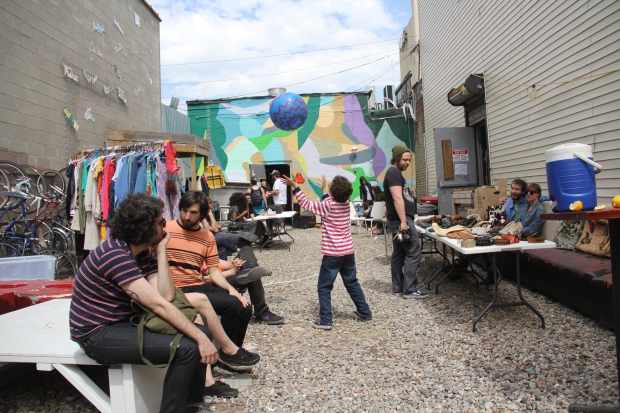 When asked about their aspirations for the community, Zwagerman said, “My hopes would be more connections made between different sub-communities in the neighborhood; creating new links, cohesiveness, and collaboration between people of different backgrounds, ages, and values, hopefully all with shared goals of making the neighborhood more liveable, safe, affordable, happy. This all sounds very idealistic, but you have to believe and hope for these things.”

Andrew McFarland added, “I’d love to see more social and cultural sustainability. From a DIY scene aspect, I think a lot of people–especially with 285 Kent closing down on the Williamsburg waterfront this past winter– are talking about how scenes are sort of just moving as gentrification moves us. I would love for things to just stay still for a while and for people to actually form connections with cultural resources, like Silent Barn. We can be invested in the community for the long term instead of moving every couple of years to a cheaper neighborhood. Cause I don’t think that’s in the community’s best interest either. I think that our fates are intertwined.” 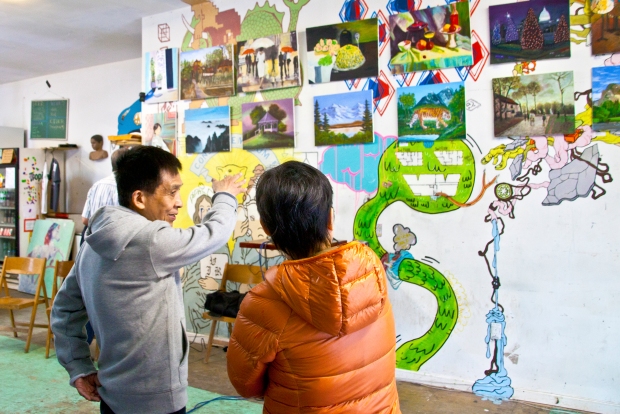 I interjected, “Pretty soon, there won’t be any place left to run, for any of us!” McFarland echoed my sentiments, saying, “If we want to be sustainable culturally we have to be sustainable socially, which means making the neighborhood affordable and [acknowledging] that we’re connected to certain groups. All people are actors and players in our neighborhood, because we are definitely all in the same boat.”

In regards to noticeable differences Silent Barn has made, Zwagerman recounted March 8, 2014, when ELM had their open mic: “Awesome neighborhood kids performed and the crowd seemed to like it. [There were] a lot of different folks who maybe haven’t been together at the same event at all. I’d like to hope that some crossover happens when you put a bunch of folks in the same room when they don’t know each other. At the very least, there’s shared cultural expression happening between the audience and performers.”

McFarland reminisced about the significant “Tongues” event organized last June by  Amritha [Kidambi] of ISSUE Project Room. “It was traditional Indian music with the Sitar. It was a beautiful night. There were other [non-Indian] artists that played songs inspired by Indian music. The event had different cross-cultural pollination. The great thing about it was that it was on a night in June and it was pretty warm and everyone was sitting on the floor of Manhattan room, the main space at Silent Barn, and it was totally full. Everyone was sitting cross-legged over the entire floor and it was so quiet in there, you could hear a pin drop. Then this beautiful music was just radiating out of the building through the warm air. It was a really awesome night. It had a lot of Indian people, but there were a lot of White twenty-somethings too. It was cool to have [experienced]. It’d be really amazing to have another event like that.

Eventually, I came to the hard, heavy-handed question, “Why do you care?” Zwagerman himself created his own DIY space in Ann Arbor, MI. After hosting a bunch of music shows in his living room, he thought, “‘Wow, you can really just bring people together like that by having a space, seeing if a few people want to perform and telling a few people it’s happening.’ It was like a really simple thing, but also really needed and powerful and people seemed to love it. So I started doing shows regularly and it expanded to some larger things in Michigan.

“But I moved to New York seven years ago and tried booking shows at a bar in Long Island City. I just got disillusioned with the music scene here in particular. I thought it really sucked. They’re really cold and ask you who you’re here to see and check off a tally mark at the door at all these clubs. It’s a very mechanical thing; admitting that people don’t actually want to see a full-billed show, because we’re all to busy. People don’t try to curate holistically. I was really bummed about it all until about five or six years ago when I found the DIY scene, like Market Hotel, etc. 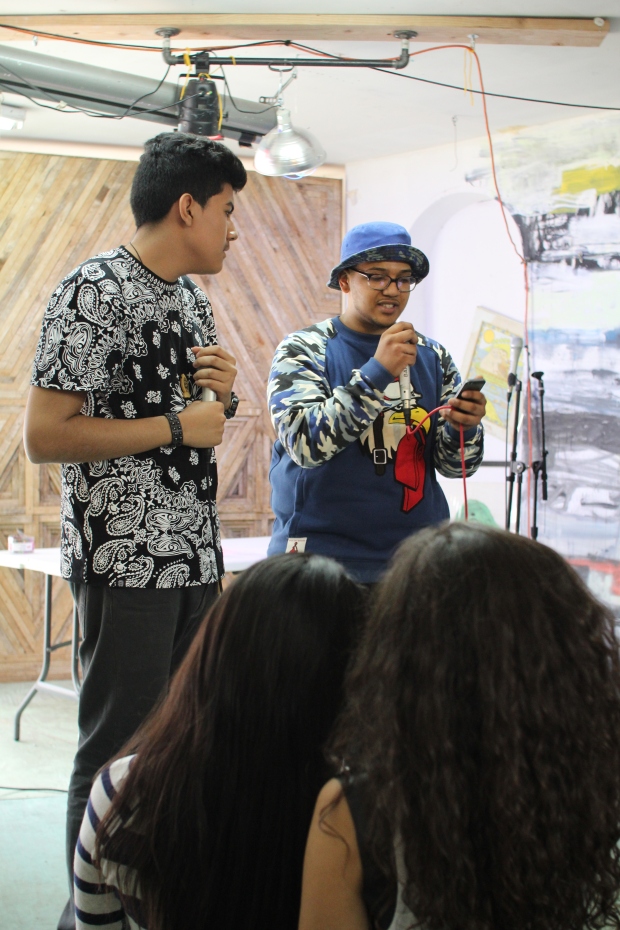 “I think in particular, the old Silent Barn on 915 Wyckoff, was probably the most intimate, homey space I found. People performing in this small space in the kitchen. Really nice people and it felt like those old house shows in Michigan, so I really connected with that. I don’t know. It’s something, I think, a way for people to become involved with the community. It makes the community seem smaller and more personal and [it also allows you to] share artistic expression in an immediate way. That’s just why Silent Barn is important to me in general and why bringing that to the surrounding neighborhood is important to me.

“We’re going to be around for the next nine years. I guess I just have a civic sense about me. I really believe in the small scale democratic values of participatory collaboration between neighbors…If we were to just exist there and serve whomever’s existing friends not the people who live two blocks away, I think it’d be a really sad thing. Spaces are a premium in NYC as is the whole infrastructure for performance in the arts. We could offer that to the neighborhood. Neighbors can take us up on it. I think it’d be a really wonderful thing and hopefully we can be a positive force in the world around us.”

Juggling art, gentrification, and the practicalities of housing issues is a tricky thing, but Silent Barn is doing pretty well so far. McFarland noted that “there was a tenants rights panel back in November; a housing rights discussion with lawyers.” Zwagerman chimed in, saying, “Primarily we’re an arts organization, but we’re also a space for public forums and information and discussion of any type, political, informational or otherwise and we’re very interested on a whole in hosting these types of events and facilitating them.” 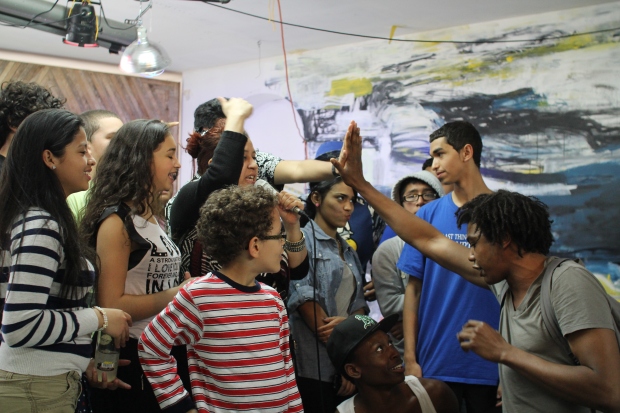 In truth, all art is media, and as McFarland explained, “media, especially today with the internet, is such an important tool for bonding and bridging communities.” Silent Barn is still growing, but they’ve made tremendous strides by incorporating the leadership of organizers, like Jaz Colon, who are already tied in with long-term communities. In fact, a few weeks ago, Jaz herself became a “chef,” a term used to designate core members of the Silent Barn. With “chef” status, Jaz can organize and host her own events and daytime programming.

This is only the beginning. We can make our communities better by “DIT”. People who had nothing to do with Silent Barn, like Jaz and I, became involved and so can you. Silent Barn Community Outreach is always looking for new members. If you have a vision for a more sustainable community, don’t be shy! You can contact us at silentbarnispeople@googlegroups.com. 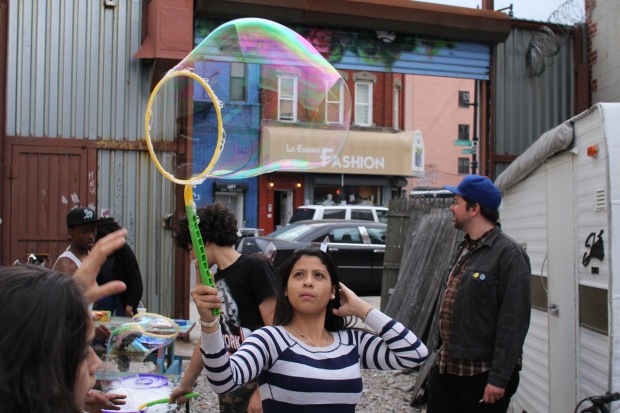