My life in motion pictures so you know how I was raised/
Worked hard to be where I’m at so you probably amazed.
How hard I worked and the stress having to get here/
Yeah that was ignorant but still what does it matter?/
When you seen friends leaking away like blood splattered
My melon leaking knowledge to educate these fruits/
Know my history before you realize bumps in the produce.
Section where I’m from, a place where lives get taken/
But when I’m gone my spirit always reawakens.
And I reincarnate to build another mindset/
And 26 bodies as much as the alphabet.
But really I’m about making the music and show my movements/
Of how much I changed matured so you can see my improvements.
Please choose him, the pokémon’s you never noticed/
And find better drum kits than the flying lotus. 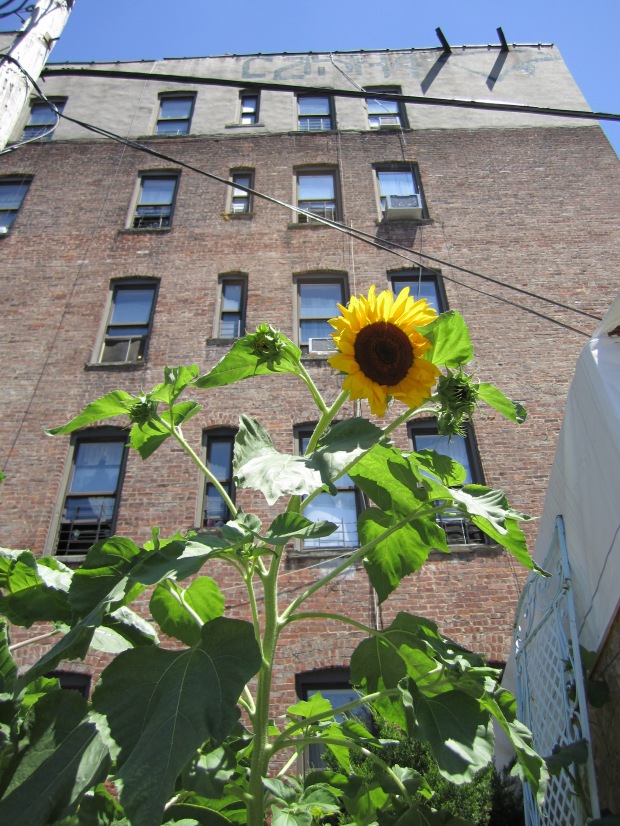 The bustling intersection of Myrtle Avenue and Broadway is the last place where one would expect to find garden beds of organic fruits and vegetables, chickens and ducks pecking in the soil, or children learning about compost and honeybees. Yet, only two blocks away on a tiny street called Stockton, you can encounter all this and more.

Bushwick City Farm sits at 354 Stockton Street and Lewis Avenue, and is technically in Bed-Stuy because it’s on the other side of Broadway. However, the name sticks because there were originally two gardens, and the one that no longer exists was just inside Bushwick’s borders. That smaller location–originally started in 2008–had to close when the owner of the lot decided to build a residential/commercial building on that site. Still, the larger site on Stockton remains.

Approaching the farm, one notices the heads of tall, strong sunflowers emerging against the backdrop of brick buildings. Inside, there is a large gazebo that shelters picnic tables, a grill, and even a bookshelf. The structure was hand-built by sixth to twelfth grade students through a program called Urban Workshop in the winter of 2013. There are hexagonal garden beds, a large chicken coop, compost bins, a beehive, and trellises for vines, all built primarily from salvaged materials. One of the main volunteers, Jason Reis, showed me the tomatoes, corn, collards, herbs, blueberries, and many other crops. A woman from the neighborhood, Elsie, was carefully removing tiny collard seeds from their pods and saving them to be planted the following year. Children played in the center of the farm, splashing each other in the swimming pool and inventing their own games.

I spoke with Jason as he staked tomatoes on a hot Sunday afternoon. He described the goals of Bushwick City Farm: to provide free food for people in the neighborhood, to create a community space, and to promote education and appreciation of organic agriculture within an urban setting. Everything at the farm is communal; people plant what they can and harvest what they like, donating their time as they are able to. On Sundays, free eggs from the chickens are given away. They have received a couple of grants from the Citizen’s Committee for NYC to pay for things like chicken feed and wood shop rental, but almost everything else is sustained on sheer resourcefulness.

The farm has clearly come a long way from being a trash filled lot three years ago. The owner of the lot is permitting people to use it, but may choose to sell or develop the site at any time. Like many things in Bushwick, the farm is beautiful but also precarious. Though it appears that most of the core volunteers are white and transplants from outside of the neighborhood, it is clear that they are dedicated to creating a space for all. The spoke in both Spanish and English and seemed to know a lot of the children really well.

Jason explained that the farm was definitely there to serve children, however they sometimes felt overwhelmed when many parents dropped their kids off and there weren’t enough volunteers to supervise. I ended up returning the following weekend when they were holding a barbeque for Parent’s Day in an effort to get more parents involved. Some parents were there, and also some other volunteers, but they all agreed that more parents still needed to get involved. We discussed the difficulties of getting people to volunteer in communities that experience a lot of hardship, but agreed that it was still important to try. The parents I spoke with said they appreciated that their kids got to experience the “circle of life” in caring for the animals and plants at Bushwick City Farm.

Young children and teens I spoke with clearly expressed their enthusiasm for spending time with the plants and chickens and playing with their friends in a safe place. Most of them had been coming since the farm was first created, and said they encouraged others to enjoy and support the project. I spoke with a visitor from Germany, who said there was nothing quite like it where she came from. She was inspired to see the place for herself when she was planning a trip to the States and saw a television program about Bushwick City Farm. There was a lot of diversity that day in terms of age, ethnicity, religion, and more, all in a very family-friendly atmosphere.

Volunteers told me they were also working to support other community gardening initiatives in the neighborhood, specifically El Garden on Jefferson Street, John the Baptist Garden, and also an initiative by some NYCHA residents up on Myrtle Avenue. They also expressed interest in supporting tenant organizing and other local activism. Looking to the future, they are hoping to get more organized (though things seemed to be running pretty well already), get more committed volunteers, produce more food, and save more seeds. Bushwick City Farm is open from 12:30PM to sundown on Saturdays and Sundays. Come by and enjoy it, and if you can volunteer, that’s even better. 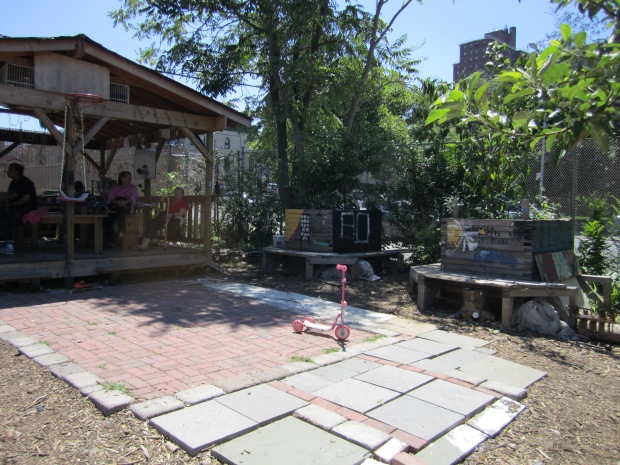 When I grow up I only wanna have 2 kids
One son and one daughter thats 2 bibs
One pink the other one is a blue bib
No twins so ima be getting 2 cribs
But this is how i want it
exactly in this order
First son and then comes my little daughter
Cause if her mother and own father is not there
God for bid, her big brother be right there
Nightmares is something that THEY will not have…
Cause they got mom
and they got dad
And as a real man ima be there for them
Ima tell them daddy is right here for them
Take care them and give them what I never had
Starting off with a dad
that wont leave them sad
The only time that im leaving is to get money
Cause I ain’t gonna be having my kids dress bummy
THEY always gonna be having food in and out the tummy
And that’s real talk
ain’t nothing funny
As a kid I was going through alot of shit
But my kids ain’t going through what they father did
And that’s word to my mother and my lil sis.
Rolando Nellis 18
Ro lives in Brownsville, Brooklyn but also spends a lot of time in Bushwick.  This kids way of releasing words is completely amazing.

July 13th 3-7pm
Bridging Bushwick is a get together that happens once a month to give the community both native and new the opportunity to get to know each other.
We invite everyone in the community to come out, bring a dish and good vibes. This months event will be at The Peoples Garden.  A beautiful tree lined garden with amazing energy.
Bridging Bushwick’s mission is to create bonds and bring people together from all walks of life. Their is a very big gap in our community and we’d like to be able to create a safe space with good energy through, pot lucks, movie nights, open mics and more.
Hope to see some new faces come and build.
Open mic performances by
Educated Lyrical Monsters Bushwick youth.

One of the things you should be doing in Bushwick this weekend if your free.
Come out and support the movement.
2:30-3:30 Live art
3:30-4:30 B Boying
4:30-7pm ELM performances with some special features.
We closing it out with a cypher ♥
$5 suggested donations and youth/kids $1 🙂
Join facebook invite here ♥ 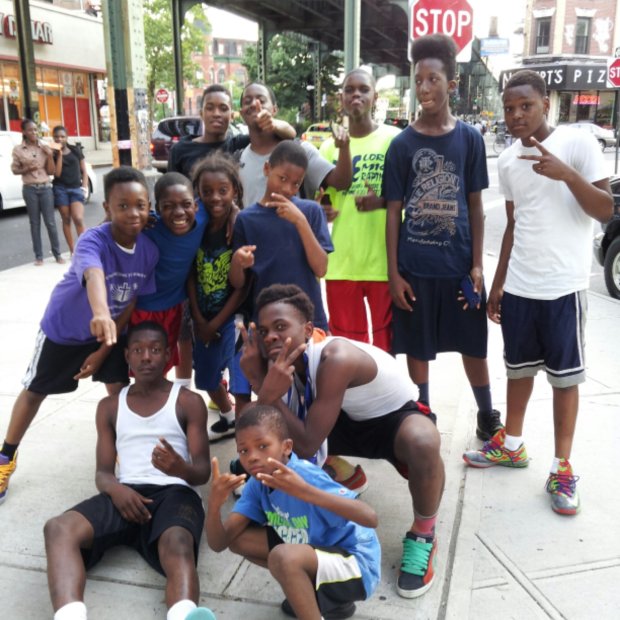 They ran up on me and asked “You want to play tag? ” I said “Do I look like Im dressed to play tag ?”
Being that I had on a very summery outfit.
I decided to take the time to talk to them and get to know them a little. They engaged and we shortly spoke about sports, school, politics, respect and leadership.
We kicked it for a bit more and then I snapped this pic.
Their quote: Sometimes you dont need to work hard, You need to work smart !
Picture taken by Jaz